Jackie's Coming Around : A tribute to the late Jackie Leven

My new single Jackie's Coming Around is a tribute to the late singer-songwriter Jackie Leven. Today ( June 18th ) is the date that would have would have been Jackie’s 70th birthday.

Jackie Leven was a Fife born singer-songwriter, who started out in rock outfit, Doll by Doll in the 70’s after having to flee his hometown because of local gang violence. After a tumultuous time, with the band imploding and a serious mugging that damaged his larynx and nearly cost him his voice, Jackie became addicted to heroin. Eventually, Jackie managed to get himself clean and headed back onto the road as a solo artist.

Here is the dip pen ink portrait that Bill drew of Jackie Leven, featured in the video below.

Bill says  “As a portrait artist I use different media and felt that for Jackie I would use old style dip ink pen. With this technique you literally scratch the lines onto the canvas – this really helped to add the intensity I wanted to draw out for the portrait.” 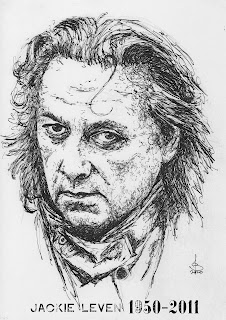 'Jackie's Coming Around' merges elements of my own songwriting journey alongside a brief musical biography of Jackie Leven’s life and weaves multiple references to tracks from Leven’s 2007 Oh What A Blow That Phantom Dealt Me album throughout.

We've recorded and produced the song at our Hushland Studio and aside from the singing, I've added acoustic guitar, banjo, harmonica, keys and soprano sax, while Bill T-B has added slide and electric guitar, bass and percussion to the mix.

The Story Behind The Track

I first met Jackie when I opened for him in Cardiff Barfly, back in 2008. Travelling the UK with my own music, I’d often heard stories about Jackie from other artists and fans, so I was curious to finally have an opportunity meet and hear the man in person. That night I was completely blown away by his songs and story telling. The dry humour and characters that Jackie evoked were wrapped up in his voice that could soar ethereally one moment and then punch you in the guts with gravitas the next.

After the gig we chatted about Kevin Coyne, one of my long time musical heroes and the highs and lows of life on the road. Jackie offered some generous comments about my own songwriting and pointed me in the direction of Karen Dalton and Judee Sill as artists he thought I would resonate with— and he was right. I walked away from that gig commenting that it was a crime that Jackie wasn’t more well known, it certainly wasn’t for lack of showmanship, musicality or ability.
On November 14th 2011, I was working on a collaborative project with composer Gill Stevens. Gill and I were just breaking for lunch when an enormous bang, made us both jump. A blackbird had crashed into her glass conservatory roof and died. At that same moment I had looked down at my social media and read the words that Jackie Leven was gone.

In these difficult and uncertain times, when so many of us are battling with the loss in different ways, I’m reminded of the way that Jackie Leven seemed to revel in defiance— against all the odds, he rebuilt his life and kept on following the muse and making music. Having had to personally rebuild myself after a serious accident in 2012, that left me unable to perform for a season, I’ve found myself drawn to the stories of those who have found a grace within, to begin again. I wrote this song on a day when future plans had fallen through, but hearing Jackie’s songs coming around on my playlist was a lifeline. Like so many artists right now in this age of necessary social distancing, I don’t know yet when I’ll next be back on the road and able to tour, but in the meantime as we work behind the scenes to figure our game plans, I’m grateful for the all gifts and encounters with so many inspiring people, that a life working in music has brought me. I’m buoyed by the stories of folks who have faced difficulties and yet found the courage to ‘keep on keeping on’— and today, on what would have been his 70th birthday, I’m celebrating the music of Jackie Leven.

And finally a lovely write up from Mike Davies on the singles bar- round up of singles and eps on Folking.com https://folking.com/singles-bar-53-a-round-up-of-recent-ep…/

This is what Mike writes here: 'June 18 would have been Jackie Leven’s 70th birthday, and to honour his memory RACHEL TAYLOR-BEALES has recorded ‘Jackie’s Coming Around’ (Hushland), a Bandcamp download single that interlaces elements of her own journey as a songwriter with a musical biography that includes references to tracks from Leven’s 2007 album Oh What A Blow That Phantom Dealt Me. With Rachel on guitar, banjo, harmonica, soprano saxophone and keyboard and husband Bill playing slide, electric, bass and percussion, opening with a memory of how a blackbird crashed into their conservatory and died at the same moment she read about Leven’s passing, it’s a suitably atmospheric but musically vibrant number, delivered in her hushed, understated voice as she recalls his advice to "keep following that muse"and reminds that while he’s gone, his music lives and on 'Jackie’s coming round to play".'