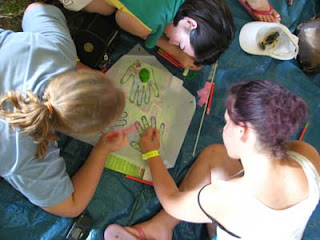 We had a great time at this years festival- though I personally didn’t get to see much apart from Billy Bragg (after my performance café gig) and Duke Special at the end of the festival Monday night (and of course some obligatory trips to the organic beer tent!) We were just really busy! As well as my gig (which was a very fun set to a packed out audience- thanks to all those who came along!) Bill and I were involved at the festival with the Scratch The Sky Project. This included a performance as Sir Silence and the Hush, several kite making workshops over the weekend(a dance workshop done by the 2 dancers from the show), a big kite installation art piece and a mass kite fly on the Monday afternoon. We had a fantastic team helping throughout the weekend and the beautiful weather all made for an exhausting but fun weekend… here are some pictures of the team and kite workshops, see my website for gig pictures… 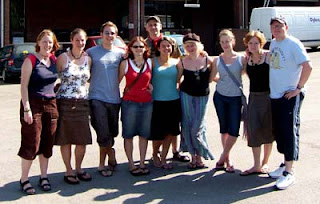 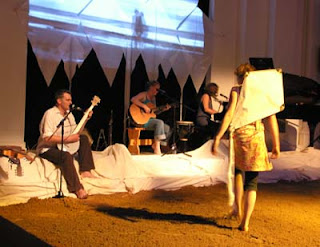 We were really pleased with this event, which was part 2 of Bill’s multi tiered Scratch the Sky art project. Alongside the CD launch Bill ran a 6 week exhibition of the different Scratch the Sky Art work he’s generated over the last year. This included a community exhibition created by local shopkeepers here in Cardiff where they illustrated their hopes and dreams and personal stories on kites, as well as the Palestine Kites and photographs we’d brought back with us (again illustrated with the stories of the young people we worked with out there) and also his own paintings and photography inspired by the theme.

For the CD launch performance, we turned the theatre space into a beach (by the use of 32 bags of sand!) and projected visuals onto a big screen made of kites. Karen Chalk (my ever faithful backing singer!) and I became ‘The Hush’ accompanying Bill as Sir Silence and our two dancers moved through the beach installation, interpreting the themes from the songs. All of this was set to a droned soundtrack of the sea playing as people entered the theatre space and throughout the show. Personally it was really fun to be part of the band and get to play banjo and sax again- as well as performing with our feet in the sand!
Posted by Rachel at 13:22 No comments: