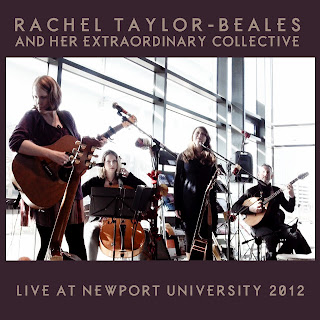 Hi Folks,
Hope you’re all managing to track down some sun during this um ‘Great British Summer?!’

It’s been an eventful year full of change and challenges in the Taylor-Beales camp. Both Bill and I have experienced several months of limited mobility since May, me due to injury after falling from stage during a sound check while on tour in Italy and Bill from major reconstructive surgery in his right hand.
All this during second and third trimester pregnancy for me! We are thrilled at the prospect of the somewhat imminent arrival of Baby Taylor-Beales and are hopeful (with the help of our medical teams) that both Bill and I will also be much more physically able post birth in these coming weeks and months!

Anyway in light of all this and the various projects that I’ve had to postpone and rearrange this year I’ve decided to release an 8 track 'Live Album' of songs that I performed at a gig in Newport University earlier this year.  The songs feature members of my ‘extraordinary collective’ Catrin Angharad (aka Angharad Evans), Rosy Robinson and Dylan Fowler.

I’m actually really pleased to have captured these moments live as the arrangements of the songs including additional welsh lyrics and harmonies are very much reflective of my live performances in the last 12 months.  I plan to take official maternity leave from now until May, but will be back with a brand new studio album to release in 2013 as well as my Counting The Waves collaborative project!

In the meantime please do download this offering from Bandcamp, and yes it is free! (Well almost- I’m collecting your emails in return to create a new database after my previous one crashed and burned with my old computer!) So please do go forth and download it and pass on and spread de word etc…

I’ll be checking into my twitter and face-book pages and emails (and no doubt posting a picture or two of baby T-B) sporadically so do feel free to drop a line if you are ever inclined these next months…
Huge thanks to you all for your ongoing support of my music,
See you sometime in 2013!


http://hushlandnews.blogspot.co.uk/
Posted by Rachel at 12:52 No comments: