For me, Leonard Cohen is one of the all-time great song-writers, his lyrics are tempered and refined to the point that there isn’t a word that is superfluous. He manages to write heart-wrenchingly personal narratives, while being able to combine big themes of human condition, searching and questioning with wry self-deprecating humour and all within the space of a few lines.

There is a Welsh word ‘hiraeth’ that is hard to translate into English correctly, but in essence it is about an aching, longing and nostalgic yearning, some describe it as a ‘searching for home’ and is said to be similar to the Portugese word saudade. I seem to resonate most with music and songs that have something of this hiraeth quality and to me the songs of Leonard Cohen ooze with it.

I’d been a fan for some time. I was introduced to his work when I was 17, by my future husband Bill. In fact I owe our getting together in some part to Cohen’s song Winter Lady. Bill sang it on the his old Epiphone guitar (and the rest as they say folks is history!)

I’ve sung Suzanne and Bird On A Wire as part of my live sets for as long as I can recall ever performing, but one day sitting on the sofa in my mid 20’s with a guitar and our Leonard Cohen songbook, the penny completely dropped. These songs weren’t just great songs, these songs were lifelines, they were about everything. Cohen had somehow captured the essence of works like Steinbeck’s East Of Eden, and encapsulated their truth in every line. These were earthy, ironic, humorous, sensual, self -deprecating, political, spiritual, poetic, punchy, portrait laments and observations of humanity. I was utterly compelled. Cohen’s words took me deeper and further into myself and then out into the external world around me. I was changed through my experience of them in a way that only art can do. Leonard Cohen’s songs ultimately left me with hope. They grappled the chaos and the darkness they confronted the “crack in everything” but they didn’t leave it there, as the cracks themselves became the vehicle for the “light to get in.”

As with any moment of revelation, I had to share this new-found truth and ran into the kitchen songbook in hand saying “Bill, these songs are so good.” Bill (unlike me) is never one to over use words and simply said “I know,” with a look of “what planet have you been living on that you’ve only just caught up?”

So it is with sadness and gratitude that I say “So long” Leonard Cohen.

Thank you for the gracious, honest and humorous reflections…

We didn’t want it darker right now but I am going to keep on ringing those bells as long as they can ring.

And we’re trying to pay the rent here but you’ll always be way up there above us in that tower of song.

Now it's closing time. You said you were going to ‘live forever’ and you were right.

Thank you for the music that will dance us to the end of love.

Why I've helped to create One Day Without Us

Fear and dread for the future is echoing through my Face-book timeline and twitter feed as people post their grief and deep concern for friends and families both in America and for the world.
It seems that globally a pendulum has been swung in favour of bigoted, racist, misogynist ideology with Donald Trump as the new US president being the epitome of this.

For me personally I fear many things: I fear the impact of climate change and the governments who dismiss the need for global action to counter this. I fear that human rights will continue to be ignored across the world and I fear the consequences of racism becoming mainstream attitude.

Here in the UK we have witnessed the terrifying rise in hate crimes as supporters of such views have felt that media and political outcomes have validated their words and actions against anyone who they perceive to be “different” from themselves.

If I remain silent on this any of this I will be complicit in it all.

This narrative of fear that is unfolding all around us focuses on what divides us. It fuels hate and creates a sense of powerlessness as we watch on horrified at all that is happening.

I choose not to allow this fear to dictate my response.

5 weeks ago I helped to initiate One Day Without Us in the UK as a way of responding to this hate filled reality with a positive, clear demonstration that the politicians, media, institutions and individuals who are spreading this toxic way of thinking are not doing it in my name.

I became one of the core team organising One Day Without Us so that I could play my own small part in being a solution.


About One Day Without Us: www.1daywithoutus.org 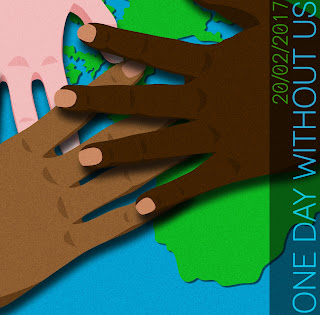 One Day Without Us imagines what the UK would actually be like for a single day without its migrants?

The impact would be disastrous with economy, food supply, health service, education system, transport system and much more being crippled.

We are calling a National Day Of Action on February 20th 2017 (also UN day of social justice) as an act of solidarity with migrant and foreign nationals living, working and studying in the UK.

We invite a wide range of action in response to this, for some this will mean a literal absenting themselves from the work place.
For others it will mean displaying posters in support. Sympathetic employers may close their businesses early. Individuals may wear badges arm-bands, hold party’s celebrations in their communities.

The message that One Day Without Us communicates is that migrants make a vital contribution to life here in the UK. We celebrate the diversity that they give and bring to British culture and that we reject politics and attitudes of hate and racism.

We also address the very real fear that many migrants from all backgrounds are currently experiencing, the fear that they will be victimised for even talking with an accent in public. We intend for our day of action to be part of a process that empowers and emboldens the migrant community here in the UK.

We are non-partisan and invite all who share our vision to become involved in whatever way they can.

Having lived much of my own life as a migrant, growing up in Australia I understand first hand the issues of relocating and have myself encountered hostility at times for being from another land.
I am heartbroken to hear time and time again from friends who come from different EU countries that they no longer feel welcome here in the UK. Many of them have children who were born here. I am deeply troubled by the fact that so many people are sharing that they are afraid to speak in public in case their accent will lead hostility from people around them.

I cannot accept this.

I think there is much anger, disillusionment and despair at the state of our current times and all of it valid, but we can’t leave it there, we have choose to respond in real ways to work for change.

Today I would like to invite anyone who is looking for ways to help bring about positive change to join us.

Help us to create a movement of people who are not bullied by fear or hate and who are not prepared to settle for any racist, xenophobic policy, speech or action that divides us from the fact that immigration is an important and healthy part of thriving economic and cultural environment to live in. That there is no “other,” we are all humans and our diversity is something to be celebrated.

www.1daywithoutus.org
Posted by Rachel at 15:25 No comments: