Earlier this year I attended a series of creative writing workshops and at one point during one of the sessions we had to do some free writing based on a childhood memory.
I found myself writing about an incident that happened just after my 6th birthday when I was about to move from Nottingham back to Australia.

I had a favourite library book of Rapunzel, retold and illustrated by Jutta Ash. 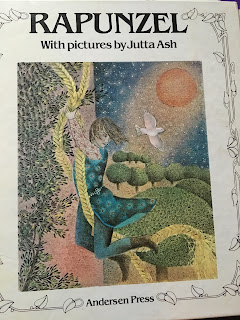 It was a book that we continuously checked out so that I could re-read it again and again. It was mostly the pictures that I loved and I would pour over them repeatedly. The story was based on the original Grim Brothers version that is a lot darker than the modern day Tangled rendition of the tale. In the retelling, Rapunzel is a musician who sings from her tower and captivates the heart of the prince riding by. Interestingly in this version of the story he doesn't ever rescue or save Rapunzel- they both end up banished, separated and in the wilderness until ultimately the power of Rapunzel's song brings them back together once more, along with the twins that Rapunzel has happened to have given birth to in the woods! (There is much that could be unpacked here: is this a really a story about teenage pregnancy... or the power of rock n roll? But I'll leave all that for another day)

Part of me suspects, that for me personally herein these pages lies an early identification with my own desire to make music. Did I look at the image of Rapunzel and see the ultimate folk singer? The Pre Raphaelite version of Joni Mitchell? Or maybe it was always just my own desire to catch myself a partner? (My singing certainly managed to play a part in captivating Bill my husband to be when we met, sooo many years ago!) 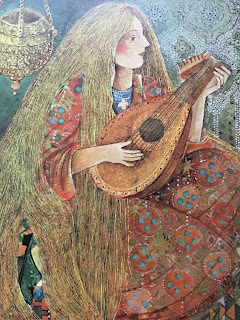 Anyway back in Nottingham in the run up to the big move there was a moment when I was requested by my slightly frazzled mum, to help her by putting a few of my favourite books and toys that were selected to be shipped, into boxes. I spotted Rapunzel on a separate pile with a stack of other books that we had to return to the library. I can remember the frustrated, disappointment that I would have to give up this book and after a brief battle with my conscience I sneakily hid the Rapunzel library book into the box with the items that would be shipped.

And so this Rapunzel book has stayed with me through every move back and forth across the world that I’ve made since that day 35 years ago. I think in my own way I was claiming a little piece of life for myself in the midst of all the letting go... and now it sits on my 6yr old daughter's shelves.
(She quite likes it, but is generally much more fond of her space books!)

I am climbing the stairs.
“Pack up your books” she said.
The boxes are ready
The piles are stacked high…
And I?
I am aware of the pile to my left
Smaller than the rest
She has put them there,
“These are not to be packed”
They’ll be returned
The last library trip
Before we leave”

And I didn’t have a name for it
But looking back, I can recognise
Grief

Rapunzel, the girl with the long golden hair
I so loved the words and the pictures of her
And I know that I shouldn’t,
And I know it’s a sin
To take something that isn’t mine
But
I love this book
With the patterned spine

And so I choose

And Rapunzel she liked it
And so did I
Guilty, but without regret
I stash and pack her 5 books deep
And watch as the packing tape
Seals her fate
And so Rapunzel gets to leave her tower
And I am her liberator
But I worry that I have buried her
Am I really her traitor?
It's a long way to travel
to Australia
“I’ll see you on the other side”
I whisper in my mind, while rehearsing my surprise...

“Oh mum look,
We never took back this library book!”
Posted by Rachel at 21:20 No comments: